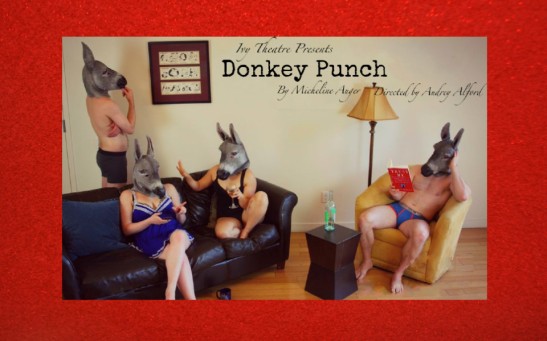 Written and directed by women (Auger and director Audrey Alford), Donkey Punch (the piece was formerly known as The Feminism of a Soft Merlot or How the Donkey Got Punched) explores feminism and women’s sexuality with the deftness of French filmmaker Catherine Breillat mixed with a true American sentiment. The play follows two friends at a crossroads in each’s life.

From the press release: In Donkey Punch, uninhibited Kareena delves into monogamy while her uptight best friend, Sam, starts dating a pornographer. In this fast-paced world of sex, shifting relationships, and blurred lines, is it punch or be punched?

You’ve got six weeks to see this stunning play, which concludes its run August 31st. Get your tickets here. And celebrate an incisive production created by female writer-director team.

This entry was posted on July 25, 2014 by worksbywomen in Off Broadway, Theater, Women and tagged donkey punch, micheline auger.