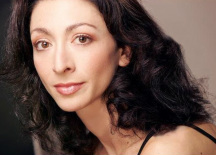 Miranda Jonte‘s world premiere play Greasemonkey offers an homage to poetry, love and her Northern California roots. A veteran actress, she wrote a monologue based on some of the greatest modern love poetry. Eventually the monologue grew into the eight character play about a woman who has suffered loss in love and family. After inheriting her father’s auto body show, she puts her life back together in an interesting way.
Miranda spoke to Works by Women about what makes the Bay Area so special, her favorite poems and how great it is to pay it forward to other women in theatre.

WORKS BY WOMEN: Your play is set in Northern California. What is special and evocative about that location?

MIRANDA JONTE: I grew up in the Bay Area and have always been so nostalgic for it. The mountains, the redwoods, the coast. All are within a stone’s throw of each other, and each has its own magic. The redwoods with their fern companions, the fog which settles in the valleys in the mornings then slowly lifts as the day wears on, the easily identifiable Monterey Cypress tree. It is these things and more which I love so deeply my bones ache. The Bay air is so distinct, so lovely, that whenever I go home, I stick my hand out the window as I drive away from the San Francisco airport, and I know I’m home. An afternoon driving down the freeway with the Golden Gate Bridge to your right and the sun hitting the Bay, this is my first love. I wanted to bottle it, write a love letter to it.

WBW: Greasemonkey touches on loss and love. How did you approach these themes?

MIRANDA: I wanted to paint a picture of a woman who’d experienced great loss in her life, and present her with an opportunity to learn who she is, and the opportunity for her to get what she wants. But first she has to face the losses and how she’s used these losses as crutches to hide from herself, and what she truly, deeply wants. I went from there.

WBW: What do you hope audiences take away from Greasemonkey?

MIRANDA: That people, though flawed, are good. Just because a love may not be the right match for you, it doesn’t mean they’re the ‘bad guy.’ It was important to me to represent men fairly and positively. I also wanted to touch on the importance of taking responsibility for oneself in one’s life and that the situations people find themselves in are often of their own making. Which can suck to recognize.

WBW:  Greasemonkey was inspired by poetry. How did love poems lead to writing a play?

MIRANDA: I’d found a wonderful, silly, sexy, smart book called Bleeding Hearts: Love Poems for the Nervous and Highly Strung, during the course of a tough breakup. I wallowed for a long time with this book and its contents of (Pablo) Neruda, (Octavio) Paz, and more. I then got a bit more active and thought to string the poems together in a monologue of a woman charting the course of a relationship. From there, I made it a dialogue of poems between a man and a woman, and finally, after I grew up a bit and was ready to take a look at my part in why my relationships had unraveled, the play began to take shape in the form it’s currently in. This play began its life on the page as a letter of apology and acknowledgement to all the men I’ve been in relationships with. Et voila.

WBW: What is your favorite poem?

MIRANDA: Are you kidding? There are several! I absolutely love Simon Marshall’s ‘When I Mentioned Love:’ ‘She said, fetch me a plaster, So I ran headlong to the bathroom cabinet and sped back fearing she had done herself injury. She took it and stuck it right across my mouth.’

Sarah Corbett’s ‘Some Suggestions Concerning You’ is also quite beautiful. Paul Nelson’s ‘Breath Poem No. 1.’

WBW:  What are the challenges facing women in American theatre?

MIRANDA: Being taken as seriously as men in the realm of directing, playwriting and producing.

WBW: What gives you hope for women in American theatre?

MIRANDA: I went to a Super Bowl party the other night and met a woman playwright, nee actor, who has got a ton of stuff in the works. This gives one hope. A girlfriend of mine has her own production company and self-produces. She was a huge help and support for me. This gives one hope. I found myself in a position to hire female designers, which was fantastic. I think paying it forward and offering advice, help, opportunity for each other, this is key. And I can’t wait to do it again. Despite the gray hair it yields.

This entry was posted on February 8, 2013 by worksbywomen in Uncategorized.